William Marshall, captain of Majestic (1914), was appointed commodore of the White Star fleet on 28 January 1930.

Marshall was the recipient of many honors in his time, including being named Royal Naval Reserve aide-de-camp to  King George V. He also served with distinction during World War I, receiving a DSO in 1916 in recognition of his service in the Auxiliary Patrol. One of his wartime missions was transporting Australian troops to Gallipoli. In 1925 Marshall was honored with the order of the Companion of the Bath by King George V.

Returning to White Star after completing his war duties, Marshall commanded Teutonic followed by Megantic, Cedric, Vedic, Arabic, Cretic and Celtic (1901). He was master of Olympic (1911) from 1925 until October, 1928, when he was appointed to Majestic.

Marshall would not serve long as a White Star commodore. He died in May 1930 and was buried at sea. The commodore was spared the ignominy of seeing his fleet absorbed into arch-rival Cunard Line in 1934. 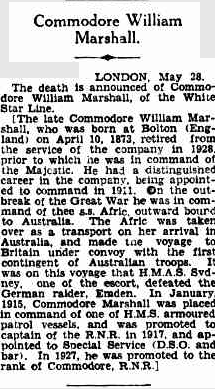