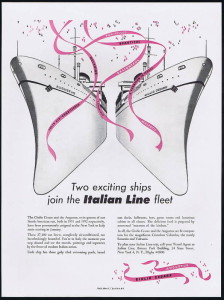 An Italian Line magazine ad announcing the introduction of  its two new liners. (Click to Enlarge)

Along with sister ship Augustus (1952), launched the same year, the 27,078 GRT Giulio Cesare marked Italian Line’s return to passenger service after suffering devastating losses during World War II. The liner was 681 feet long and 87.2 feet at beam. Powered by Fiat diesel engines, the twin-screw Giulio Cesare had a rated service speed of 23.3 knots. Sadly, vibration problems created by the powerful engines plagued the liner throughout her life.

Designed to provide service between Italy and South America, Giulio Cesare initially ran a Genoa-Buenos Aires route. In mid-1956, she was transferred to Genoa-Cannes-Naples-New York service. In 1960 she returned to Italy-South America service, continuing in that role for the next 13 years.