Once again, Cunard is partnering with the Greatest Generations Foundation to pay tribute to distinguished World War II combat veterans with a unique enrichment program.

Passengers on Queen Mary 2’s 20 July eastbound crossing will get a very personal glimpse into the veterans’ wartime experiences. There will be Q&A’s and other discussions with the World War II veterans on topics including “The Battle of the Atlantic: How the Allies Won the War”; “Pearl Harbor: An American Sailor’s Firsthand Account of Pearl Harbor”; “The Dead & Those About To Die: The Big Red One At Omaha Beach”; “Normandy: D-Day with the Screaming Eagles” and “Battle of the Bulge: Alamo in the Ardennes.”

Here’s a story that won’t be told during the voyage. It’s about a British Army driver who landed in France on a Liberty ship. He drove across northern Europe, eventually participating in the Battle of Hamburg. Post-battle, while stationed in Hamburg, he met a German war widow and fell in love. Several months latter, the solider was called back to England. Soon thereafter, the widow and her three-year-old daughter traveled to Portsmouth for a reunion. The couple married in 1947.

In 1949, seeking a fresh start in the New World, the small family took a short trip over to Southampton and boarded Queen Mary. A few days later they arrived in New York, where they spent the rest of their lives.

The soldier was my father, who passed away in 1978. The war widow was my mother, who followed my father in 1982.

Three cheers for Queen Mary and the wonderful Queen Mary 2 (on which I sailed with my wife, Southampton to New York, 61 years after my parents’ voyage). 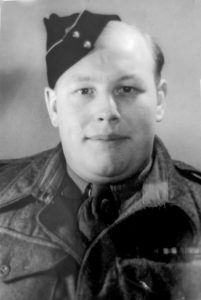