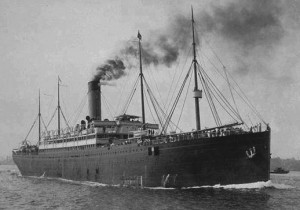 The first radio rescue at sea took place on 23 January 1909. On that day a Morse code distress call—CQD—was sent by White Star Line’s Republic (1903), which in dense fog had collided with the Lloyd Italiano liner Florida (1905). Republic’s signal was detected and relayed by the nearby Nantucket Island station. The US Revenue Cutter Gresham picked up the message from Nantucket and immediately headed to the collision site to help the victims.

Both Republic and Florida were heavily damaged, and Republic eventually sank. Yet passengers and crew who survived the initial crash were safely evacuated to Florida and White Star’s Baltic, which had also received the distress call and steamed to the scene. Two Republic passengers, asleep in their cabins, were killed when Florida’s bow sliced into the ship. 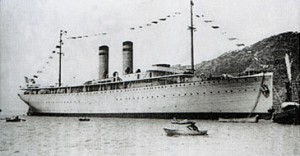 “CQD” (calling all stations, distress) preceded “SOS” as the international distress signal. The letters SOS were selected for their distinct and unmistakable sound (dit-dit-dit, dah-dah-dah, dit-dit-dit).

Republic now rests in the Atlantic near Nantucket, just a few miles southeast of the Andrea Doria wreck. There have been persistent rumors that the liner was carrying a large consignment of gold. One rumor is that she was carrying about $265,000 in American gold coin (not adjusted for inflation or the rising price of gold).

Yet rumors that Republic was carrying a large gold shipment were proved to be unfounded when the liner was discovered and explored in 1981. Subsequent visits to the wreck also found no traces of gold. Still, the rumors persist, and there will likely be future visits to the Republic wreck to search for her supposed lost treasure.

Listen to a Music Hall Tribute