On Sunday, June 25, 2017, Cunard flagship Queen Mary 2 set sail from Saint Nazaire, France, to cross the Atlantic in a once-in-a-lifetime Transatlantic “Race” against four of the world’s most famous trimarans in ‘The Bridge 2017.’ 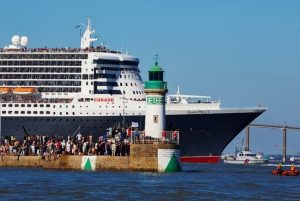 Cunard flagship Queen Mary 2 sails out of French port city of Saint Nazaire at the start of ‘The Bridge 2017,’ a Transatlantic “Race” against four trimarans.

‘The Bridge 2017’ is a series of events commemorating the centenary of the first landing of American soldiers in France during WWI in June 1917. It is also a celebration of 100 years of friendship between France and the U.S. ever since that landing. The luxury cruise line Cunard, a company known for its rich history and significant role in both World Wars, is taking part in this historic celebration by sailing Queen Mary 2 from Saint Nazaire, France, where the ship was originally built, to her U.S. homeport in Brooklyn, New York, arriving on July 1.

The four multi-hulls accompanying Queen Mary 2 across the North Atlantic are helmed by award-winning skippers Thomas Coville for Sodebo Ultim, Francis Joyon for Idec Sport, and the two fastest around-the-world sailors, François Gabart for Macif, who has won the most races, and Yves Le Blévec for Actual.

“We are honored to be part of The Bridge 2017,” said Josh Leibowitz, senior vice president, Cunard North America. “Cunard, with its 177-year history, has been recognized for its role in World War I and we are privileged to be an important part of this historic event which celebrates Franco-American relations and their shared pastime of sailing.”