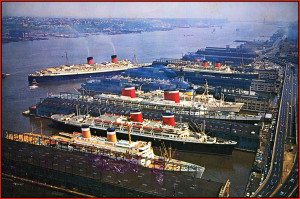 A quaint scene on New York’s West Side. (Click to enlarge)

Soon, it would possible to count the number of remaining transatlantic superliners on one hand: France (1962), Michelangelo, Raffaello and United States. Ocean liners would continue to carry passengers, but no longer would they serve as the primary form of long distance international transportation.

Meanwhile, at John Brown and Co. in Clydebank, construction was proceeding on a new Cunard flagship that would soon enter a rapidly dwindling and economically uncertain transatlantic passenger market.