In partnership with The Greatest GENERATIONS Foundation, Cunard will pay tribute to the forgotten heroes of World War II with a unique enrichment program on board Queen Mary 2’s transatlantic crossing, August 4-12, 2017.

On this 8-night voyage departing from Southampton, England, guests will have the opportunity to attend lectures and interact with several WWII veterans, hearing first-hand about their experiences during America’s involvement in the war. From the “Battle of the Atlantic,” to the conflicts in Normandy and Pearl Harbor, these distinguished war heroes will engage in discussions and Q&A’s, giving guests a very personal glimpse into the human elements of wartime service. 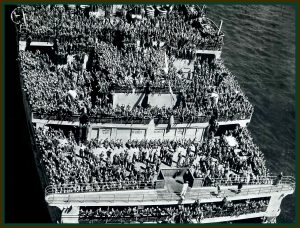 “Cunard played a pivotal role in World War II, with our liners Queen Mary and Queen Elizabeth transported as troop ships, and together carried over 1.5 million servicemen across the Atlantic, to and from the field of battle,” said Josh Leibowitz, senior vice president, Cunard North America. “We are honored to partner with The Greatest Generations Foundation to offer our guests this once-in-a-lifetime opportunity to meet these decorated veterans.”

Actual WWII veterans scheduled to be on board will include American veterans Arthur Staymates, who stormed Omaha beach in D-Day’s first wave with German machine-gun fire hammering on the door of his landing craft; Joseph Reilly, who parachuted into Normandy five hours before the seaborne landing; Douglas Dillard, who made his first parachute combat jump in August 1944 in the South of France; Jack Holder, who was a Naval Flight Engineer stationed on the Island of Oahu and had to take cover during the Japanese attacks on Pearl Harbor; Michael Ganitch, who served on the USS Pennsylvania and witnessed the attack on Pearl Harbor; and Stuart Hedley, also at Pearl Harbor, who recalls leaping from his ship into the water and coming up amid debris and burning oil and swimming for his life towards the shoreline.

Canadian veteran Kenneth Scott, who served in the Royal Canadian Navy and saw wartime action aboard the RMS Aquitania, will also join the voyage. With a normal troop capacity of 7,400, Aquitania was among the select group of large, fast former passenger ships capable of sailing independently without escort transporting large numbers of troops that were assigned worldwide as needed.

Q&A’s and other discussions with the WWII veterans will cover topics including:

● The Battle of the Atlantic: How the Allies Won the War
● Pearl Harbor: An American Sailor’s Firsthand Account of Pearl Harbor
● The Dead & Those About To Die: The Big Red One At Omaha Beach
● Normandy: D-Day with the Screaming Eagles
● Battle of the Bulge: Alamo in the Ardennes