Queen Mary is in such deplorable condition that she could sink if an attempt were made to tow her, according to a story in the Scotland on Sunday newspaper.

Politicians in Scotland have led calls for an international fundraising campaign to restore the former Cunard liner and urged UK Prime Minister Theresa May to put pressure on the US government to step in, the newspaper reports. 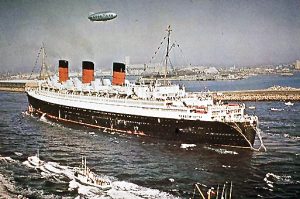 Meanwhile, a report in the Long Beach Press-Telegram claims that the historic liner’s hull is corroded so severely from the inside that certain areas, including the ship’s engine room, could be prone to flooding. If a breach did occur, there are no steel watertight doors that could be sealed, and no way to pump water out because the bilge system is inoperable; any major flooding could cause the ship to sink to the lagoon floor. The pillar supports for the raised false floor in the exhibition space (where events are held) are corroded throughout and could cause “immediate collapse” under the weight of just a few people.

A recent marine survey estimates the total cost of ship repairs could range from $235 million to $289 million and predicts the work would take up to five years to complete. Roughly 75 percent of the repairs were deemed “urgent,” according to the study.

“I was on the vessel about a month ago, and it’s all the more awful,” former Long Beach Councilman Doug Drummond told the Press Telegram. Drummond said that keeping the liner is a “big mistake. “I know the people who love the vessel have very strong feelings, and I respect that, but somewhere along the line there’s a moment in time that you say, ‘Public money and public policy demands that the ship be scrapped.’”

Long Beach officials told the Press-Telegram that the survey’s findings are being discussed with the ship’s current leaseholder, Urban Commons, and both are committed to preserving the historic asset and making sure it can safely remain open to the public. The city in November approved $23 million to address the ship’s most urgent repairs, and Urban Commons is working to secure additional funding, according to the newspaper.