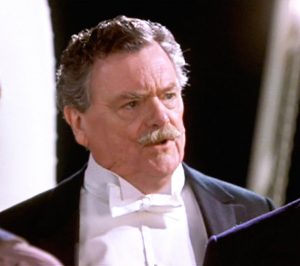 Actor Bernard Fox (above, right), who had a brief but memorable role in “A Night to Remember” (he spotted the iceberg that would eventually sink Titanic), has passed away from heart failure at age 89. Nearly 40 years later, in James Cameron’s “Titanic,” Fox portrayed first-class passenger Col. Archibald Gracie IV, who survived the ship’s sinking.

American TV fans may best remember the Welsh-born Fox for his recurring appearances in a pair of 1960s sitcoms. He was the dotty Dr. Bombay on “Bewitched” and the fussy, inept Col. Crittendon on “Hogan’s Heroes.”

According to news reports, Fox liked to joke to friends, ” I’m the only person to have survived the Titanic twice.”

He is survived by his wife, Jacqueline; a daughter, Amanda; and two grandchildren.