A news report states that Queen Mary is about to get a long-needed interior renovation.

The Los Angeles Times reports that Los Angeles developer Urban Commons, which took over a long-term lease for the city-owned ship and adjacent land earlier this year, plans to give the Queen Mary the “luxuries of a boutique hotel, while preserving the feel of a ‘bygone era’.” 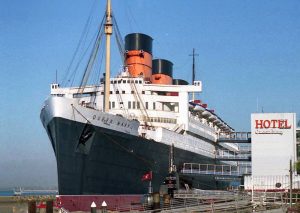 Queen Mary has been permanently moored in Long Beach, California, since 1967.

According to the report, hotel corridors will be rehabbed and larger flat screen TVs and faster WiFi will be added to the historic liner’s 346 staterooms and nine suites. Sofas, queen mattress and carpets will be replaced within the rooms and showers upgraded.

The story notes that sofas “will be in their original Art Deco style and existing night stands, head boards and dressers will be refurbished.” Urban Commons is also working with Brintons, a UK firm that designed some of the original carpeting onboard, to recreate patterns that existed in 1936 when the liner embarked on her maiden voyage.

Urban Commons also reportedly plans to update the Observation Bar, extending seating onto the deck to create an “indoor-outdoor” experience.

The work is expected to be completed by late next year.

The article didn’t mention whether Queen Mary’s long-neglected exterior will also be addressed during the renovation.