Earlier this year, the luxury cruise operator announced an effort to restore the long idled liner to its former life as a glamorous ocean liner. But after a feasibility study, Crystal Cruises and the SS United States Conservancy have determined that refurbishing the ship to sail would be too challenging, the groups said Friday. 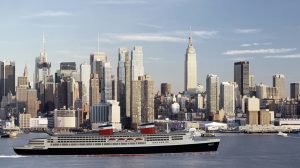 Well, it was a nice dream anyway.

“Unfortunately, the hurdles that would face us when trying to bring a 65-year-old vessel up to modern safety, design and international regulatory compliance have proven just too great to clear in both a technically and commercially responsible manner,” Crystal President and CEO Edie Rodriguez said in a statement.

Crystal, which signed an option agreement with the conservancy in February, will donate $350,000 to the Conservancy, which plans to resume its efforts to preserve the vessel.

“The next chapter of the SS United States’ story has yet to be written, and I assure you that we are nowhere near ready to turn the final page. We will continue to advance our historic mission, full speed ahead!” said Conservancy Director Susan Gibbs

According to reports, Crystal’s thorough examination concluded that the 65-year-old vessel, taken out of service in 1969, remains fundamentally sound. On the other hand,  the need to replace the liner’s aged steam engines  would have required rebuilding about 25 percent of the hull. These and other changes, necessary for the project to make business sense as a cruise ship, raised the prospect of, in effect, transforming the vessel into an entirely new ship.

The Conservancy says it will renew its efforts to find an investor who will convert the liner into some type of permanently-docked facility.