Queen Mary has returned to her birthplace on the Clyde. No, not the Queen Mary, which remains permanently berthed in Long Beach, California, but the plucky little steamer that for a short period of time created a major headache for Cunard Line executives. 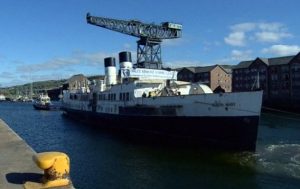 Built in 1933, the smaller Queen Mary was one of the last steamships to be launched from the legendary Clydebank dockyards. The 250-foot, two funnel, two class, ship sailed for decades from Glasgow to a variety of Scottish destinations. At the outbreak of World War II, she became a lifeline for Scotland’s island communities.

In 1936, just before the larger Queen Mary was ready to launch, Cunard executives were shocked to discover that there was already a passenger ship bearing the name. A settlement was eventually reached with the smaller Queen Mary’s owner that specified that the Clyde steamer would be renamed Queen Mary II. (Yes, there is indeed a Cunard liner today with a similar name.)

Retired in 1977, with her name reverted back to Queen Mary, the little steamer spent the next several years as a floating restaurant. In 2008 she was sold to a private owner named Samuel Boudon, but plans to restore her collapsed and the vessel fell into disrepair.

Queen Mary arrived at Greenock on Sunday after being towed from the Port of Tilbury in Essex. A charity backed by comedian Robbie Coltrane is now raising funds to restore the ship and berth her permanently in Glasgow.  It is anticipated that £2m will be needed to complete the restoration.