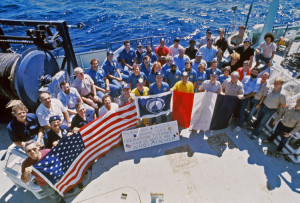 Knorr made history in 1985 when she carried Woods Hole researchers to the Titanic wreck site.

Employees of the Woods Hole Oceanographic Institution gathered Tuesday to bid the vessel a final farewell. Ballard used Knorr in 1985 to locate Titanic’s exact location, which was long a matter of mystery and dispute. The 279-foot-long vessel logged over million miles during the past four decades on various exploration missions, encountering everything from hurricanes to Arctic ice. She was officially decommissioned in 2014.

Discovering and photographing the sunken Titanic wuth Argo, a towed unmanned submersible packed with sonar gear and cameras, was Knorr’s most publicized accomplishment. The doomed ocean liner was found approximately 400 miles south of Newfoundland at a depth of 13,000 feet.