Bill Gadsby passed away on 10 March 2016 at the age of 88. Gadsby played in 1,248 National Hockey League games during a career that saw him skate for the Chicago Blackhawks, New York Rangers and Detroit Red Wings, spending the final five seasons of his career in Detroit from 1961-66. Gadsby also coached the Red Wings to a 35-31-12 record from 1968-70. 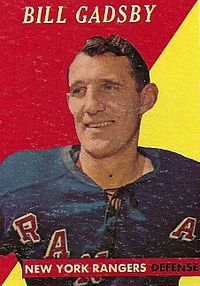 Gadsby was 12 years old and crossing the Atlantic with his mother on Athenia at the outset of World War II when the liner was torpedoed and sunk by a German U-boat. They spent several hours in a lifeboat before being rescued.

The Calgary, Alberta, native  set an NHL record for assists by a defenseman— 46 —for the 1958-59 Rangers, and was a three-time runner-up for the Norris Trophy as the N.H.L.’s leading defenseman

The Donaldson liner Athenia was torpedoed and sunk on 3 September 1939. Two days earlier, German troops had crossed the border into Poland. Notes of protest were followed by ultimatums from both Britain and France. With no response from Germany within the allotted time, by noon on 3 September Britain was at war.