Ocean Dream (1972), a classic cruise ship that appeared in the original Love Boat TV movie back in 1976, has capsized and partially sunk approximately a nautical mile off the Laem Chabang, Thailand, breakwater, according to Maritime News. 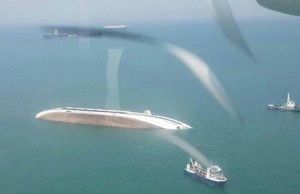 Ocean Dream was anchored in the Gulf of Siam for more than a year after being abandoned by her crew and owner.

Local authorities are monitoring the ship’s wreck for leaks. No one was on board the vessel at the time of the incident. The authorities are reportedly investigating the root cause of the accident.

Ocean Dream was originally ordered in 1970 by Norwegian Caribbean Line as Seaward. She later sailed for P&O Cruises as Spirit of London. In 1974 she began service for Princess Cruises as Sun Princess. By 1988, after a $6 million refit, she was sailing for Premier Cruises as Starship Majestic.