It’s Getting Ugly Out There
Compared to their predecessors, most of today’s cruise ships look like hell—monstrous blocks of floating Lego, that appear to have been designed by five-year-olds inspired by Soviet-school architects. This is because few cruise lines really care about their ships’ external appearance. It’s what’s inside and on deck that drives the bookings, they reason. What’s the difference if scores of personal verandahs ruin a ship’s appearance? Who cares if every ship, cost-effectively built in modular blocks, looks like every other ship? People want to eat and play. Once on board, no one notices how the ship looks. 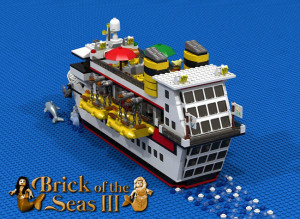 Well, perhaps to the surprise of many cruise industry executives, appearances really do count. Even Las Vegas, hardly the global arbiter of good taste, strives to enhance and differentiate its mammoth resorts in novel ways, such as by making them look like a Venetian palace, a pyramid, the New York skyline or a medieval castle. The resort’s exterior style, even if only viewed on a website, prepares the guest for the experience that awaits inside.

What sort of experiences do today’s cruise ships promise? A forgettable one, apparently. After all, an ugly, boring exterior augurs an ugly boring experience (even if the ship’s interior happens to be really nice). Poor exterior style also does little to build brand loyalty or repeat sales. Put simply, bad styling is bad business.

People like to feel that they are part of something special, that they have arrived at a place they will remember and cherish long into the future. That’s hardly the aura created by today’s largely forgettable-looking, spiritless cruise ships. Most passengers, I suspect, can’t even remember the ship’s name a year or two after their cruise.