Amazingly, after decades of neglect and indifference, United States may now actually be the target of multiple real estate developers. 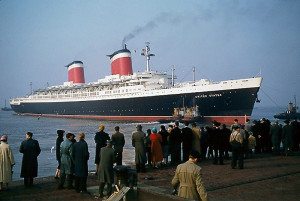 According to a report in The Brooklyn Paper, John Quadrozzi Jr., the Gowanus Bay Terminal owner who hopes to move the historic liner to Brooklyn’s Red Hook neighborhood and fill her 12 decks with tech start-up offices, a gym, a swimming pool, restaurants, a theater, a maritime school and a maritime museum, is now encountering unexpected competition.

The Red Hook concrete tycoon is reportedly facing pressure from rival real estate developers who not only have the estimated $50 to $200 million needed to refit the ship, but can also back up their plans with engineers and contractors, according to a spokesman for the SS United States Conservancy, which owns the vessel. Quadrozzi says he is currently treading water—investors won’t commit to the project until the ship’s owner does, and the conservancy wants the investors on board before agreeing to move forward with the project.