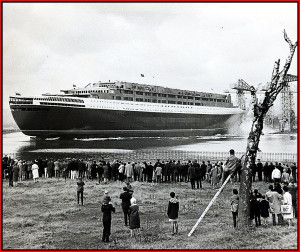 Arnott was with QE2 at the beginning.

Perhaps no other individual had a longer and closer association with QE2 than Arnott. He was appointed QE2’s chief officer in October 1967, serving under her first master, Captain William Warwick. Prior to the liner’s launch, Arnott oversaw the line’s construction at John Brown & Co. on the Clyde.

Arnott joined Cunard Line in 1947. His first assignment was on Queen Elizabeth (1940) as a junior third officer. In 1952 he transferred to Queen Mary. In 1953 Arnott was commissioned into the Royal Naval Reserve. Throughout the 1950s and 1960s he served in and commanded numerous Cunard passenger and cargo ships.

Arnott was appointed QE2’s staff captain in 1972. He became the liner’s master in October 1976. During his career on Cunard liners “Captain Bob” hobnobbed with the rich and famous—including Noel Coward, Liz & Dick and Isaac Asimov—as well as untold thousands of less esteemed passengers. 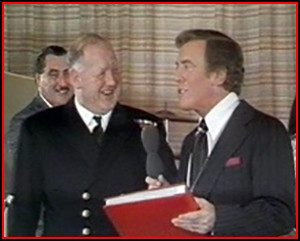 Arnott is surprised on This Is Your Life.

In 1977 Arnott was the subject of the television show This Is Your Life, hosted by Eamonn Andrews and broadcast live from QE2.

Arnott published his autobiography, Captain of the Queen, in 1982. He retired from QE2 and Cunard Line in 1985.

Arnott was born on 17 July 1923 in Hamilton, New South Wales, Australia, to English émigré parents. His family, however, soon returned home to Lancashire, were Arnott spent most of his youth.

Arnott married Joan Hardern in 1948. She predeceased him in 2006. Arnott is survived by a son and three daughters.