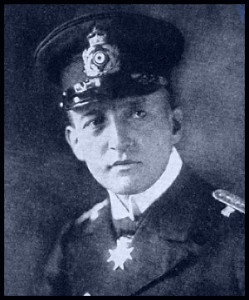 Kapitänleutnant Walther Schwieger was killed in action on 5 September 1917 when his U-boat, U-88, was chased by HMS Stonecrop, hit a British mine, and sank in the English Channel near Terschelling, The Netherlands.

In May 1915, as the thirty-year-old commander of U-20, Schwieger was responsible for the torpedoing of Lusitania, leading to the deaths of 1,198 people.

Schwieger was an aggressive and skillful naval officer. In 1917 he received the highest honor a German naval officer could receive. He was also on the British Admiralty’s list of potential war criminals.

Schwieger’s body remains entombed inside U-88.

“Many people must have lost their heads; several boats loaded with people rushed downward, struck the water bow or stern first and filled at once. . . . The ship blew off steam; at the bow the name “Lusitania” in golden letters was visible. The funnels were painted black; stern flag not in place. It was running 20 nautical miles. Since it seemed as if the steamer could only remain above water for a short time, went to 24 m. and ran toward the Sea. Nor could I have fired a second torpedo into this swarm of people who were trying to save themselves.”
—From an official translation of Schwieger’s diary