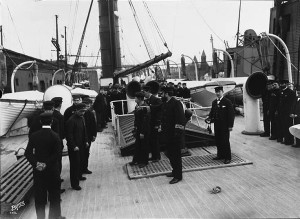 At the time of her launch, Servia was the second-largest ship in the world (530 feet long, 52.1 beam). She was assigned to Cunard’s premier Liverpool-New York service.

Although not a particularly well-known vessel, Servia is notable for a couple of important “firsts” in ocean liner development. Servia was the first steel-hulled Cunard liner and was also the first to be lit by electric incandescent lamps. Yet despite these important advancements, Servia still had rigging and could hoist sails for auxiliary “green” propulsion when necessary. 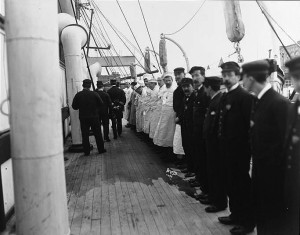 An 1898 crew inspection. The kitchen staff is in white, of course.

In an era of rapid liner evolution, Servia was quickly superceded by even faster and more luxurious vessels. When Campania and Lucania joined the Cunard fleet in 1893, Servia was downgraded to intermediate service. She was pressed into Royal Navy service during the Boer War and used to transport troops to South Africa.

An aging and seriously outdated Servia sailed to the breakers in 1902.