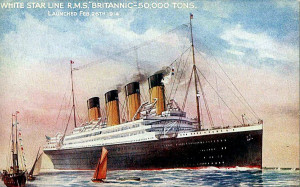 Britannic was White Star Line’s third and final Olympic-class ship, following Olympic and Titanic. Britannic was originally going to be named Gigantic, but in the wake of the Titanic disaster White Star decided to throttle down its hubris a bit. In any case, with World War I brewing and patriotic feelings running high, Britannic was deemed to be a much more appropriate moniker.

As it turned out, Britannic gave up her life for King and country. Before ever carrying a paying passenger, she was thrust into service in November 1915 as a hospital ship. On 21 November 1916, while stationed in the Mediterranean, HMHS Britannic struck a mine (or, less likely, was hit by a torpedo) and sank.

The silent newsreel footage above, which begins on a foggy day at the Harland &Wolff shipyard in Belfast, presents various views of the Britannic construction. Most impressive are the views of a funnel being readied for installation. It’s hard not to think of Titanic while viewing this rare film.

If World War I hadn’t intervened, Britannic might have become one of the greatest ocean liners ever, but she never got the chance.