The first Caronia to sail for Cunard Line was popular with both transatlantic and early cruise passengers. 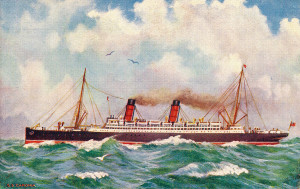 Caronia (1905) began her maiden voyage on 25 February 1905, Liverpool to New York. The first of the three Cunard vessels to bear the name, Caronia was built by Glasgow’s John Brown & Co. The liner served on many different routes during her long lifetime. A 1906 cruise from New York to the Mediterranean marked the first of many such voyages Caronia would make in the coming years. On 14 April 1912, Caronia sent the first radio ice warning to White Star Line’s ill-fated Titanic.

Caronia was briefly placed on Cunard’s Liverpool-Boston service in 1914, but the start of World War I saw her requisitioned by the government and transformed into an armed merchant cruiser. In 1916, the liner was converted into a troopship and served in that role until the end of hostilities. Caronia returned to the Liverpool-New York run after the war. In 1920, Caronia was converted from coal to oil. After returning to service, she sailed on a number of different transatlantic and cruise routes.

Age finally caught up with Caronia at the end of the 1932 transatlantic season. A global economic depression, which greatly lowered the demand for winter cruises, also contributed to the popular liner’s demise. Caronia’s final voyage, London-New York, was on 12 September 1932, after which she was sold to breakers. Caronia was scrapped the following year in Osaka, Japan.

As the newspaper story below notes, Caronia could “be made unsinkable,” thanks to a system of water-tight bulkhead doors. (A concept that was disproven in April 1912.)

Caronia was so loved by her passengers and crew, that Cunard’s first great post-World War II liner would be named after her. 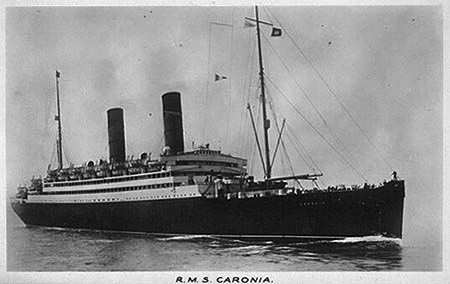