Saxonia was launched by Lady Churchill on 17 February 1954 at John Brown and Co. in Clydebank, Scotland.

Saxonia, the second Cunarder to be so named, was the first of four Cunard liners (along with Carinthia, Ivernia, and Sylvania) designed for service between Britain and Canada. Like her sisters, Saxonia was built to operate as a hybrid passenger-cargo ship.

Small and Valuable
Smaller liners like Saxonia played an important role in ocean liner history. Such vessels provided valuable transportation to ports around the world that the superliners rarely, if ever, visited. 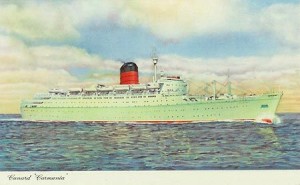 Saxonia, launched with a traditional black and white ocean liner livery, sported a green hull (like Caronia (1949)) when she became Carmania.

Yet in the 1960s, with air transportation booming, the need for small liners began declining. In 1962-63, with transatlantic liner traffic waning, Saxonia was refitted for winter cruising (including the addition of an outdoor swimming pool). Renamed Carmania, she received a Caronia-style green paint livery, sailing between the UK and Canada in the summer and touring Caribbean and Mediterranean ports in the winter.

Sold to the Soviets
In 1971 a financially-struggling Cunard Line pulled Carmania out of service. In 1973 she was acquired by the Soviet Union and renamed Leonid Sobinov (after a noted Russian actor). In 1990, after the collapse of the Soviet Union, she was registered in Malta.

The classically-styled liner spent her final years as a budget cruise ship, traveling between Mediterranean ports before heading to the breakers in 1999. 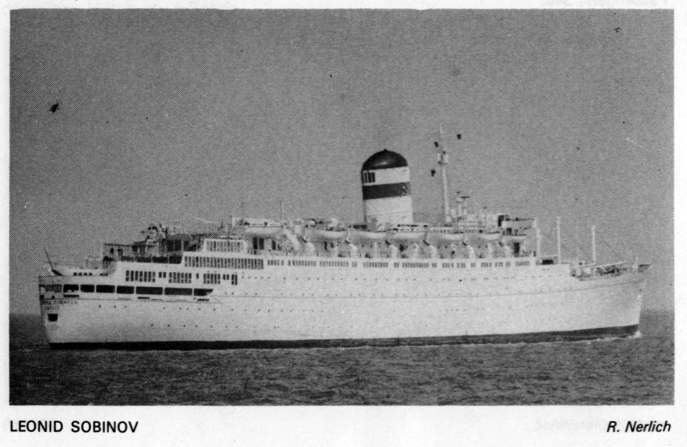