Perhaps the most tragic figure in ocean liner history was born on 7 February 1873. Thomas Andrews Jr. was the naval architect in charge of the plans for Titanic (1912), and many other fine Harland & Wolff vessels.

Andrews, born in Comber, Ireland (today Northern Ireland), had an “in” at shipbuilders Harland & Wolff—he was the nephew of Viscount Pirrie, the firm’s owner. Andrews left school at 16 to become an apprentice at his uncle’s firm. Over the years, he rose through the ranks to become the Harland & Wolff managing director in charge of design. Andrews became a member of the Institution of Naval Architects in 1901.

Andrews made it a practice to accompany White Star liners on their maiden voyages to study how his various design features functioned under real-world conditions. When Titanic collided with an iceberg on 14 April 1912, Capt. Edward J. Smith consulted with Andrews, who predicted that the fatally damaged liner would sink in less than two hours.

Tragically, Andrews’ recommendation that Titanic carry 46 lifeboats (instead of the 20 she sailed with) and be constructed with a double hull and watertight bulkheads that extended up to B deck, were ignored. 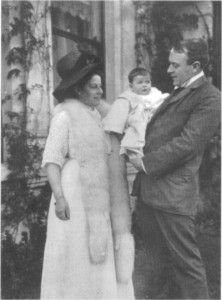 Andrews and his family.

It was no fault of Andrews that Titanic met such a fast and tragic end. One can only imagine the mental agony he must have endured during the liner’s last moments.

Andrews was reportedly last seen in the first-class smoking room staring at the painting “Plymouth Harbour” above the fireplace, his arms folded over his chest and his lifejacket lying on a nearby table. But this account has since been disputed by several Titanic researchers. In any case, Andrews died in the disaster at age 39. He was survived by his wife, Helen Reilly Barbour, and their daughter, Elizabeth.

The last surviving vessel Andrews designed is the White Star tender Nomadic, which has been preserved in Belfast, Northern Ireland.