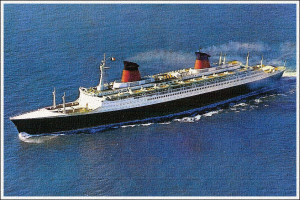 Despite rotten weather and rough seas (it was February, after all), the vessel that would prove to be France’s final superliner arrived in New York on time. France received the spirited welcome that New York traditionally awards an ocean liner on her initial entry into the harbor. France’s arrival also generated massive amounts of media coverage on both sides of the Atlantic.

France would provide reliable and luxurious service between Le Havre and New York for over 12 years, even as airline competition steadily eroded her passenger base and financial losses mounted. The transatlantic party lasted until 1973 when a global oil crisis drove fuel prices to record highs and made the liner unacceptably unprofitable, turning her into something of an “éléphant blanc” or “objet superflu.” 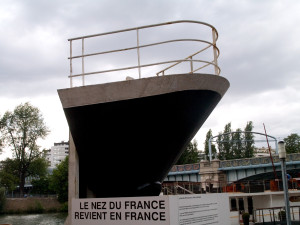 French Line soon bowed to the inevitable and began looking for potential buyers. As the search dragged on, the company announced that France would be withdrawn from service on 25 October 1974. Even a month-long crew mutiny that saw France anchored for a time at the entrance to La Havre harbor, blocking all incoming and outgoing maritime traffic, couldn’t reverse French Line’s decision.

France would eventually go on to have a successful second life as a much-beloved cruise ship bearing the name Norway, yet her days as a transatlantic superliner ended in an atmosphere of sadness and turmoil in late 1974.