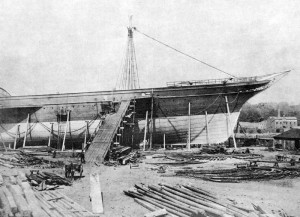 The forward section of Persia under construction in 1856. This image is one of the earliest photos in of a ship being built on the Clyde.

Cunard Line’s Persia (1856) began her maiden voyage on 26 January 1856. It was a relatively eventful journey for the plucky paddlewheeler, given the fact that she struck an iceberg en route. Persia was spared from serious damage by hitting the iceberg head on, spearing the frosty obstacle with her pointy clipper bow.

A Graceful Beauty
Built by Robert Napier & Sons in Glasgow, Persia was a handsome vessel with lines of grace and beauty from figurehead to taffrail. The world’s largest ship at the time of her first voyage (although soon eclipsed by Brunel’s Great Eastern), the iron-built Persia was 360-feet long with a 45-foot beam. The 3,414-ton vessel featured two funnels, two masts and an iron paddlewheel. Her service speed was approximately 12 knots.

In June 1856 Persia captured the Blue Ribbon for the fastest crossing of the Atlantic up to that time, lowering the Queenstown to New York record to nine days, one hour and forty-five minutes. 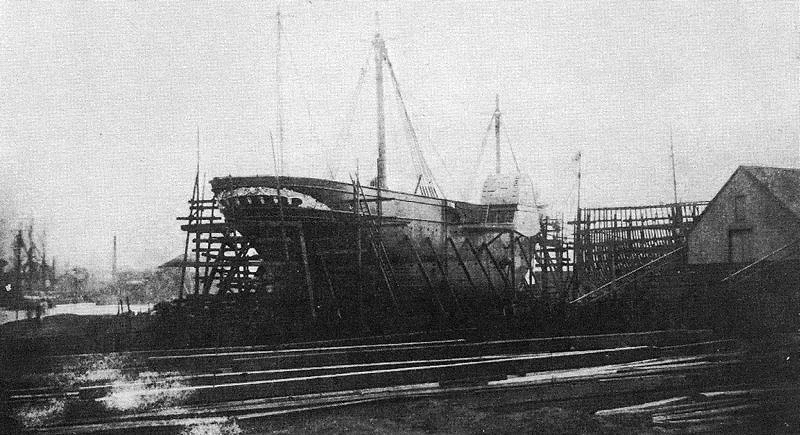 Another view of Persia under construction.

Troopship
In 1861, Persia and several other British liners were pressed into service as troopships to transport soldiers to Canada for a possible war with the United States. Tensions were heightened on 8 November 1861 when the US warship San Jacinto intercepted the British liner Trent of the Royal Mail Steam Packet Co. and removed two Confederate States diplomats. The envoys were bound for Britain and France to press the case for diplomatic recognition and financial support for the rebel nation.

Fortunately, the incident was amicably resolved after several weeks and Persia returned to civilian service, sailing for Cunard until 1868. She was broken up on the Thames sometime in the early 1870s.