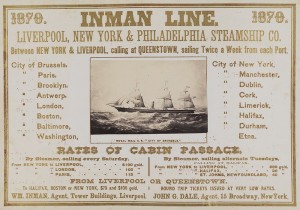 In the days before radio, ships often disappeared without a trace—the vessels simply never turned up in port (in this case, Liverpool). After a while, people gave up waiting and the ship was presumed to be “lost at sea.”

People speculated for years about City of Boston’s fate. Some said the ship sank in a violent gale. Others thought she hit an iceberg. In 1875, after a ship carrying a hidden bomb exploded in Bremerhaven (killing 80 people), there was speculation that the same “dynamite fiend,” insurance extortionist Alexander Keith, Jr., might have planted a similar explosive onboard City of Boston. 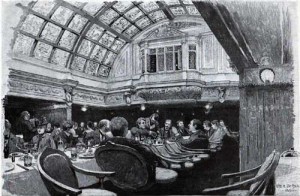 Leads to a shipment of cargo booked by a “James Thompson” (a known Keith alias) on City of Boston strengthened the connection that the liner, her passengers and crew were the unwitting victims of an insurance scam. Yet in time it was discovered that James Thompson was a real merchant who actually lost a valuable cargo of furs when City of Boston vanished. A shipment that, incidentally, he was unable to obtain insurance for.

So, despite some tantalizing leads and coincidences, all that can be said today about City of Boston is that she was “lost at sea.”

And if you think that something similar can’t happen today, consider the case of Malaysia Airlines Flight 370 on 8 March 2014.