As was the case with Normandie in 1942, water poured onto the vessel by fireboats dampened the inferno but also caused the ship to capsize. The burned-out, partially sunken hulk remained in the busy harbor until it was dismantled and sold for scrap in the period between 1974 and 1975. The historic liner’s keel and boilers still sit on the harbor floor, marked as a hazard on navigational charts.

Questions Arise
Was the fire suspicious? Many think so. At the time of the fire, the South China Morning Post cited an official with the liner’s owner as claiming that the blaze broke out in four different locations simultaneously. Meanwhile, Hong Kong’s fire chief told the press that he was surprised at the fire’s intensity. Accusations were made (then and now) that dissatisfied laborers set the ship alight. Still, all these years later, no definitive proof of arson has even been found. 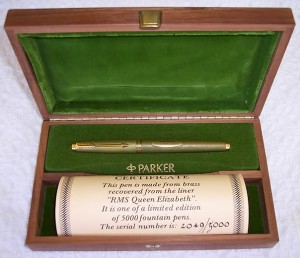 Several years ago, Parker Pens created a special edition of 5,000 pens made from parts of the wreckage. Each pen came in a presentation box and was accompanied by a certificate of authenticity.

Eerie Foreshadowing
On the evening of 28 January 1953, a fire of suspicious origin broke out in one of Queen Elizabeth’s main deck cabins as she lay in the George V dry dock in Southampton. The blaze was quickly extinguished by teams of shipboard and Southampton firefighters, but detectives of the Criminal Investigation Department said at the time they were not satisfied that the fire was accidental.

Just three days earlier, the 24,325 GRT Canadian Pacific liner Empress of Canada had burned out and capsized at her dock in Liverpool.