All work on building Queen Mary—then simply known as Hull Number 534—was halted on 11 December 1931 due to the worldwide economic depression. Some 3,000 John Brown and Co. shipyard workers were let go, leading to a very sad—and scary—Christmas in Clydebank. 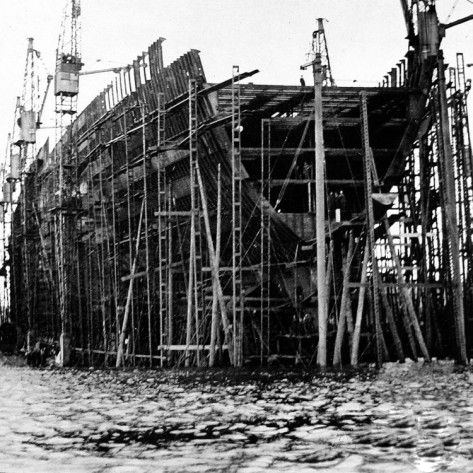 As if the shipyard crisis wasn’t bad enough, as many as 10,000 other workers at Queen Mary suppliers throughout the UK also lost their jobs over the course of the next several weeks. Most of these workers, like their Clydebank counterparts, remained idled for many years, and many never returned to the jobs they were trained for. Member of Parliament David Kirkwood said, “As long as Number 534 lies like a skeleton in my constituency, so long will the depression last in this country. To me, it seems to shout ‘Failure! Failure!’ to the whole of Britain.”

A £9.5 million government loan was granted to Cunard Line in the spring of 1934 as an integral part of the company’s merger with White Star Line, providing enough money to complete Queen Mary and to build a second liner—the future Queen Elizabeth (1940). 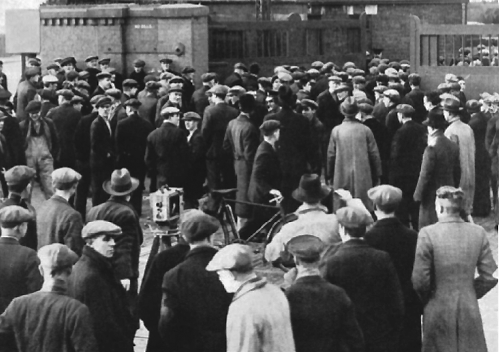 Workers return to the shipyard, April 1934.

Work on Hull Number 534 resumed in April 1934. To the accompaniment of bagpipes, some 400 shipyard workers proudly marched back to the worksite. Their first task: removing dozens of bird nests and over 130 tons of rust from the hull. Yet on 26 September 1934 Hull Number 534 was ready to be named and launched.