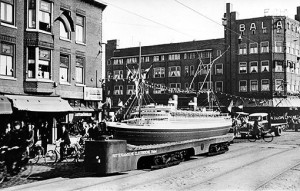 A Nieuw Amsterdam model rolling down a Rotterdam streetcar track during a 1938 parade.

From that day on, until she was removed from service in 1974, the last active representative of the golden age of ocean liners—a vessel that shared the waves with such renowned ships as Normandie, Bremen, Rex, Queen Mary, and Queen Elizabeth (1940)—sailed year-round as a cruise ship, based in Port Everglades, Florida.

For almost a century, passengers could travel between Rotterdam and New York on a Dutch ocean liner. Rotterdam (1872), the first vessel owned and operated by the Netherlands-America Steamship Company, the predecessor of Holland America Line, made her maiden crossing 99 years earlier on 15 October 1872.

With Nieuw Amsterdam’s removal, the only big liners still making regular transatlantic crossings after November 1971 were Cunard Line’s Queen Elizabeth 2, French Line’s France (1962), and Italian Line’s Michelangelo and Raffaello. The sun was rapidly setting on a grand and glorious era. By the decade’s end, QE2 would have the market all to herself.