Campania was the world’s largest and fastest ocean liner when she joined the Cunard Line fleet in 1893. On her second voyage she won the highly prized Blue Riband for the fastest-ever transatlantic crossing. 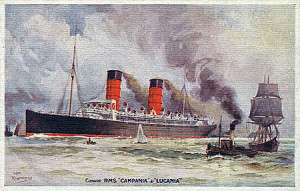 Campania and her sister ship, Lucania, had the largest triple expansion engines ever installed in a Cunard vessel. Both ships were the first liners to be equipped with wireless stations. Campania was also one of the most luxurious liners of her era. According to maritime historian Basil Greenhill, writing in his book “Merchant Steamships,” the interiors of Campania and Lucania represented Victorian opulence at its peak—an expression of a highly confident and prosperous age that would never be quite repeated on any other ship.

Rendered obsolete by larger and more modern liners, such as Mauretania and Lusitania, Cunard retired Campania in 1914 after 250 voyages. Then things got kind of strange.

Campania was saved from the breakers by the Admiralty and transformed into HMS Campania. The old liner’s elegant fixtures were gutted and she was rebuilt into a primitive aircraft carrier. Equipped with a flight deck and hangar,  Campania was now capable of handling both airplanes and observation balloons. The addition of a 220-foot flight deck necessitated the removal of the forward part of Campania’s superstructure, as well as her first funnel (which was replaced by dual narrow funnels positioned on each side of the flight deck structure). Campania could be used to launch land or sea planes, but sea planes still had to be retrieved by crane and land planes needed to find somewhere else to land.

Campania after her conversion into an aircraft carrier.

On 5 November 1918—just six days before the armistice was signed—a sudden squall in the Firth of Forth sent Campania careening into the battleship HMS Royal Oak. She then slid along the side of the battlecruiser HMS Glorious.

Heavily damaged, Campania started sinking by the stern. Hours later an explosion, likely caused seawater pouring into a boiler, sent the former liner to the bottom. 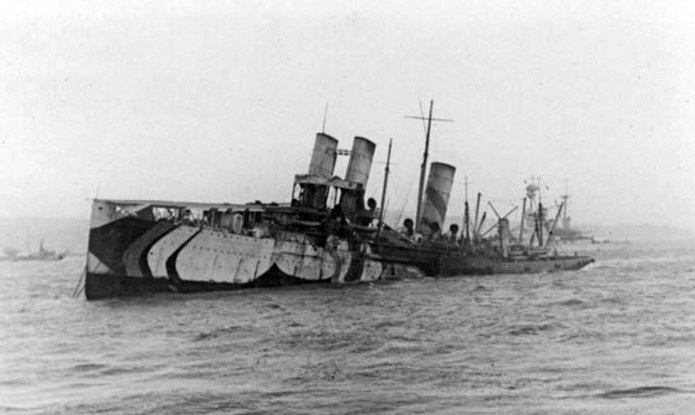 Are you the type of person who would stiff your cabin steward at the end of a crossing? Of course not! So please help keep Ocean Liners Magazine afloat. Any amount will be greatly appreciated.
—Regards, John Edwards, Editor/Publisher