Sagafjord was designed to serve as a small, high-end transatlantic luxury liner at a time when her target passengers were increasingly flocking toward first-class air transport. In fact, it was around this time that a New York Journal-American columnist, Igor Cassini, writing under the pen name “Cholly Knickerbocker, coined the term “jet set.”

Listen to a 1975 Sagafjord US radio commercial

In 1983, after deciding to get out of the passenger ship business altogether, Norwegian America sold Sagafjord and her fleetmate, Vistafjord, to Cunard Line, which at the time was looking to build a stronger cruise industry presence. The addition of two small classic ocean liners, designed from the outset to double as cruise ships, would nicely complement Cunard’s much larger Queen Elizabeth 2. 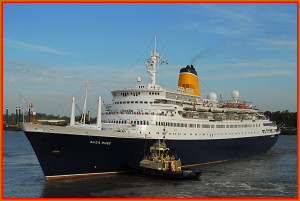 Sagafjord sailed successfully under the Cunard flag until 1996, when she was briefly operated by Transocean Tours under the name Gripsholm. The following year, as Cunard began planning a new fleet of modern, larger cruise ships, she was sold to Saga Shipping and renamed Saga Rose.

Attracting older, primarily British, passengers Saga Rose would sail on cruises around the world for the next 12 years. Yet time was creeping up on the venerable liner. New safety measures mandated by International Convention for the Safety of Life at Sea (SOLAS 2010) raised the need for extensive and expensive renovations and upgrades. Her owners decided to it was time to move on.

In 2010, one of the world’s last surviving ocean liners was scrapped—gone forever.