One and a half years after a devastating fire raced through USS Lafayette (ex-Normandie), it was time to free the capsized former superliner from her shallow, watery grave. On 4 August 1943, final pumping operations began at New York’s Pier 88. 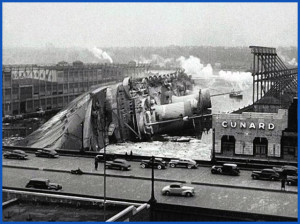 The operation, conducted during the middle World War II within one of the world’s busiest harbors, used technology today would be considered downright primitive. Jets of water were directed at the hull to break the suction as the ruined ocean greyhound gingerly rose upright from the muddy river bottom. Meanwhile, multiple pumps within the hull worked to remove the tons of accumulated silt weighing down the wreck. When the hull had been righted to a 45-degree angle, it was nudged to the center of the slip separating Piers 88 and 90, positioning it for the final righting process.

The process for removing toxic and environmentally-dangerous materials… Well, actually, people didn’t pay attention to such things in 1943, so there was no toxic materials removal process. Everything was more or less just dumped into the harbor.

Righting Lafayette was completed on 7 August 1943. With her superstructure removed, she was reclassified as an aircraft and transport ferry and placed in drydock in October 1943. After careful analysis, the Navy determined that the time and cost necessary to repair and convert the heavily damaged Lafayette was too high. She was sold as scrap in October 1946 to Lipsett, a New York-based salvage company. Scrapping was completed by the end of 1948.

Until 2014, Lafayette held the record as the world’s most expensive maritime salvage operation.