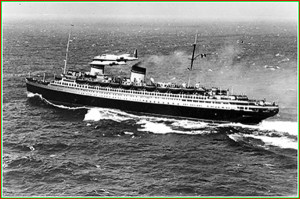 Italy had never been a major player in the North Atlantic liners race, but Benito Mussolini was intent on making his nation a world power. Il Duce felt that a sleek, modern liner would help project Italy’s image as a great innovator and commerce leader.

Rex was in every respect a world-class ship of state, although she represented something of a throwback in style. While the greatest liners of the era, including Normandie, Bremen and Queen Mary, all embraced the new Art Deco movement, Rex was steeped in classic—some would say stodgy—design. Yet no expense was spared in creating a luxurious, sumptuous superliner that was more like a floating resort than a maritime version of a big city hotel. Real beach sand was sprinkled around her swimming pools to drive home the point at she was the “Riviera Afloat.”

Rex’s was expected to take the Blue Riband on her maiden voyage, but due to persistent engine problems she did more floating than moving on her initial journey. Once those issues were resolved she was able to join the ranks of the ocean greyhounds. Rex held the Blue Riband between 1933 and 1935. 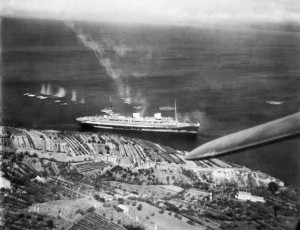 Rex attacked by British bombers in 1944.

Rex fell victim to an air attack in 1944 as she was being moved by the Germans to blockade Trieste harbor. Before Rex reached her final position, British bombers attacked and destroyed her.

One of the bomber pilots later remembered, “She still looked big and beautiful actually, and it seemed sad that one had to sink something of that sort. But at the same time this was war, the war had been going on for five years. And during the war you can’t really question the target and say that ship is too beautiful to sink … and so if we were told to sink it, then we would do our best to sink it.”