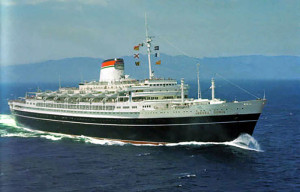 In the years after World War II, Italian Line gradually returned to the seas with a series of sleek, yacht-like vessels of which the 29,083-GRT Andrea Doria was the most famous and luxurious.

On the evening of 25 July 1956, Andrea Doria was bound for New York. Sailing through fog off Nantucket Island, an officer of the watch spotted Stockholm on radar. The 12,165-GRT Stockholm, was just beginning her voyage to Sweden. Inexplicably, the two liners, although visible to each other via radar, steered toward each other at a combined speed of roughly 40 knots.

On Andrea Doria, the approaching ship appeared to be maintaining a position just off the starboard bow. According to the Stockholm’s radar, the oncoming Andrea Doria clearly appeared to be a few degrees to port and on a parallel course. Placing his faith in his ship’s radar system, Andrea Doria Captain Piero Calamai controversially opted to pass the approaching vessel starboard-side to starboard-side. Standard procedure when two ships meet at sea is a port-side to port-side passing. 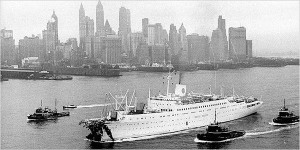 Calamai’s decision turned out to be a tragic mistake. Stockholm’s ice-breaking bow sliced into the starboard side of the Andrea Doria aft of the bridge at 11:10 p.m. Soon Andrea Doria was listing so badly it became difficult to launch her port lifeboats.

A flotilla of rescue ships, led by French Line’s venerable Ile de France, rushed to the scene. At least 50 lives were lost and Andrea Doria sank to the bottom of the North Atlantic.

The wreckage lies in 240 feet of water, attracting numerous divers over the last half century searching for souvenirs and artifacts. At least 16 divers have lost their lives exploring the wreck. The most recent death occurred in July 2015.

For many observers, the incident seemed to present a coda for ocean liner travel, already reeling from increasingly relentless airline competition. New ocean liners would be built, including a pair of stylish giants for Italian Line. Yet as the sun rose over a foundering Andrea Doria on the morning of 26 July 1956, it was hard to feel optimistic about the future of ocean liner travel.