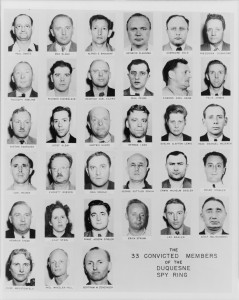 On 16 July 1941, while anchored at Quarantine in New York harbor, USS West Point (ex-America of United States Line) secretly boarded 37 Italian citizens and 327 German citizens from the recently closed American consulates of those nations. West Point got underway that afternoon, bound for Lisbon and arriving there on 23 July.

The evacuation story was widely covered in American newspapers. What the public didn’t know at the time was far more disturbing.

Earlier that year, unknown to United States Line management, a pair of Nazi spies—Franz Joseph Stigler and Erwin Wilheim Siegler—worked as America crew members. The duo was used by the German government to observe the movement of ships and defense preparations at the Panama Canal and at various other locations. The men continued working on the liner until she was requisitioned by the Navy.

Both men were arrested later in 1941 by FBI agents after their activities were revealed during the investigation of a major Nazi spy ring. Stigler and Siegler were found guilty at trial and both served lengthy US prison sentences.