Anchor Line’s California (1907) was launched in Glasgow on 9 July 1906 at the D&W Henderson shipyard. Her maiden transatlantic voyage, Glasgow to New York, began on 12 October 1907. 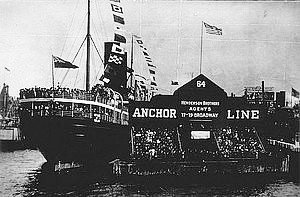 California (not to be confused with Californian, the Leyland Line vessel that notoriously failed to respond to Titanic’s distress calls on the morning of 15 April 1912) was one of many small workhorse liners that attracted little attention during their time and are largely forgotten today. At 470 feet long and 58 feet at beam, the 8,662 GRT California carried 1,214 passengers (232 first class, 248 second class and 734 third class) at a rated service speed of 16 knots.

While far from luxurious, she was outfitted with many modern (for the time) technologies, including electric light and refrigeration.

California was plagued by misfortune during her relatively brief life: