On 5 July 1970 Great Britain (1845), the world’s oldest surviving ocean liner, was brought back from the Falklands to Bristol, England, in the hope of restoring her to her former glory. 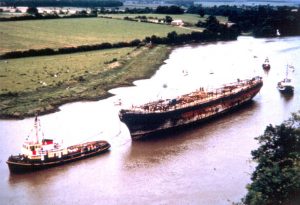 Approximately 100,000 people stood on the banks of the River Avon that day to view a dark,  rusting hulk under tow. Great Britain had returned home. If you think United States is currently in bad shape, you should consider the task that faced Great Britain’s conservers and restorers. She was, quite literally, a wreck.

The brainchild of Victorian master engineer Isambard Kingdom Brunel, Great Britain was launched by Prince Albert in 1843 to provide luxury travel to between England and the US. The vessel set new standards in engineering, reliability and speed and was the world’s first large iron ship to be driven solely by a screw propeller.

On 26 July 1845, Great Britain undertook her maiden voyage to New York, a journey she completed in a then-astounding 14 days. Great Britain continued to be successful, sailing on various runs around the world. 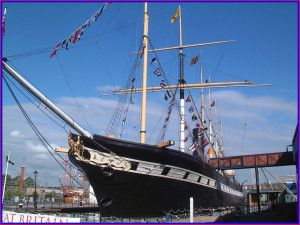 In 1886, the ship encountered trouble in a storm off Cape Horn and was forced  to seek refuge at Port Stanley in the Falklands. Her owners found it too expensive to repair her, so she was sold to the Falklands Trading Company. Great Britain then spent the next 51 years as coal barge and wool storage hulk before being abandoned to the elements.

Painstakingly conserved and restored, Great Britain is now a museum ship in her homeport, Bristol. She is an example of how a historic ocean liner can be saved to enlighten and educate future generations on maritime and ocean liner history.