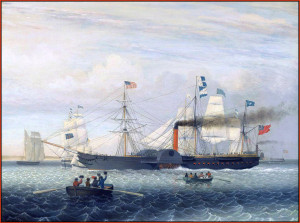 People had sailed across the North Atlantic for hundreds of years, but it took Samuel Cunard and his namesake shipping line to make transatlantic voyages safe, fast, predictable and reliable. Cunard’s idea was literally world changing, and it’s comforting to know that even several decades into the jet travel era it’s still possible to take a Cunard liner from Britain to America (or America to Britain).

On 4 July 1840, a cheering crowd in Liverpool bid farewell to Samuel Cunard and his new steamship Britannia (1840), bound for Boston via Halifax.

It was a speedy passage (for the time). On 18 July, Britannia steamed proudly into Boston, her paddle wheels churning the dark water and her hissing, pounding engines resounding across the harbor. 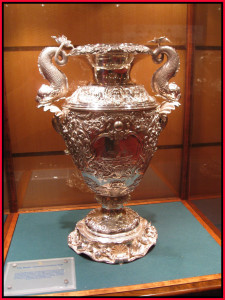 As Fort Independence boomed a cannon salute, Cunard and his vessel received the sort of welcome that returning astronauts would experience over a century later. The Boston Daily Advertiser accurately proclaimed: “Since the discovery of America by Columbus nothing has occurred of so much importance to the New World as navigating the Atlantic by steam.”

On 22 July, some 2,000 people gathered outside Maverick House in East Boston to celebrate Britannia’s arrival. The main event was the presentation to Cunard of an engraved silver cup.  Today, anyone who ventures onboard Britannia’s direct descendant,  Queen Mary 2, can see the Boston Commemorative Cup, given to Cunard by the grateful citizens of Boston.