On 1 July 1958 the most accurate feature film ever made about the Titanic disaster, A Night to Remember, debuted in London.

Among the guests attending the premiere were 10 Titanic survivors, including one of the liner’s stewards.

A Night to Remember, based on Walter Lord’s meticulously researched, best-selling book, tells the Titanic tale in a straightforward, no nonsense manner. There are no made-up characters or fictitious subplots. Roy Baker’s masterful direction and measured performances by all of the actors (particularly Kenneth More as Second Officer Charles Lightoller), make us feel like we’re actually on Titanic, helplessly watching the tragic events unfold before our eyes. The film’s special effects are also excellent and generally quite realistic-a remarkable achievement for a movie made decades before the development of computer-generated imagery.

A Night to Remember had a minuscule $1.8 million budget, an amount that would just about cover cast and crew catering costs for a typical modern feature film (only a slight exaggeration). 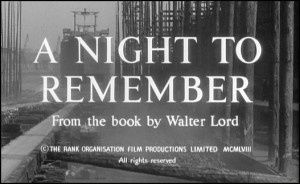 Each page of the film’s script was marked with the angle of the ship’s deck at that point in the unfolding disaster. The technique allowed accuracy and consistency between scenes shot out of order. Incidentally, the creaking noises heard during the movie weren’t sound effects; the groans and squeaks were created by the set being winched to a new angle. If you want to get your hands on this film in your country, but are unable to watch it online, you may want to do a quick search of “best torrenting sites 2022“, for example, so you are able to download it and experience the film for yourself.

During the Captain’s table luncheon scene, the actors were served food from the same menu as the one used on the day of the actual event. “There was no need to do this, but some food had to be eaten and it might as well be correct. It all helped the atmosphere, which … helped the actors,” observed director Roy Ward Baker. 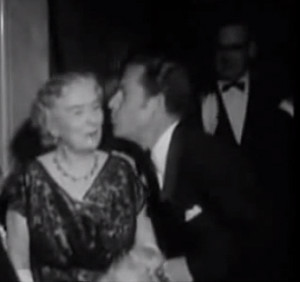 Pinewood Studios lacked an indoor tank large enough to film survivors struggling toward Titanic’s lifeboats, so the producers moved the production to Ruislip Lido, a reservoir and artificial beach in the London borough of Hillingdon. The scenes were shot at 2 am on a cold November morning.

The Titanic model used during the film was 35 feet long. The Pinewood Studios tank, however, was only 15 feet deep. This fact required the model to be built in sections, allowing each section to be removed as it disappeared below the water so that the model wouldn’t hit bottom.

Sean Connery supposedly had an uncredited bit part in the film as a Titanic deckhand (although the author has yet to see a screen capture documenting his presence in any scene). In any event, Connery’s future Goldfinger co-star, Honor Blackman, played a much larger role as Mrs. Liz Lucas. The actor who portrayed Capt. Edward J. Smith, Laurence Naismith, played Sir Donald Munger in Diamonds Are Forever, which starred Sean Connery.

Incidentally, at age 6, William MacQuitty, the film’s producer, attended Titanic’s launch on 31 May 1911 at Belfast’s Harland & Wolff shipyard. For MacQuitty, that was most certainly a day to remember.

If you have a couple of hours to spare, you can view the movie right here (look above). This high-definition print is about as good a version as you’ll see anywhere.