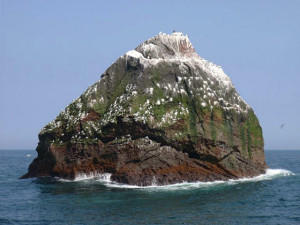 Until Titanic sank, the Norge tragedy of 1904 was the worst-ever Atlantic maritime disaster.

On 28 June 1904, the Danish liner Norge (1889), carrying mostly immigrants from Copenhagen to New York, ran aground close to Rockall, a towering pile of granite rising like a stony iceberg out of the Atlantic some 200 miles off the coast of Scotland. The final death toll was more than 635. There were 160 survivors who spent up to eight days in open lifeboats before rescue; several perished shortly thereafter.

The disaster occurred after Capt. Captain Valdemar Johannes Gundel unwisely decided to steer Norge on a course south of Rockall. Although strong and unpredictable currents made the southerly route highly dangerous, Gundel had followed it many times before. This time, his luck ran out.

Some of the eight lifeboats launched from Norge sank quickly. A few were spotted and rescued by fishermen. One group of survivors was put ashore at Stornoway, Scotland, and treated at the local hospital. Nine survivors succumbed to their ordeal and are buried at Sandwick Cemetery. One boat is reported to have drifted northeast to and beyond the Arctic Circle, but this story has never been confirmed.