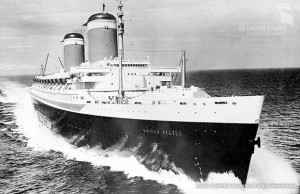 Young liner in a hurry.

United States arrived in New York for the first time on Monday, 23 June 1952.

Fresh from the Newport News, Virginia, shipyard and packed with dignitaries and celebrities, the new liner received an enthusiastic welcome to the Big Apple. A few weeks later, after the completion of her first transatlantic roundtrip, United States would return to New York triumphantly waving the Blue Riband, the accolade given to the passenger liner crossing the Atlantic in regular service with the record highest speed.

Media attention was intense on that very first visit, with radio and television stations providing almost non-stop coverage. The only downside to the day was the weather, which was rainy and dreary.

Exactly 38 years later, on 23 June 1990, Hoverspeed Great Britain, a vessel built by Australian shipbuilder Incat for operation between England and France by Sea Containers Ltd., broke the record for the fastest crossing of the North Atlantic by a commercial passenger ship.   The crossing, from Ambrose Light at New York began at 7.30pm on June 19, 1990 and the 2,922 mile journey ended at England’s Bishop Rock on the morning of 23 June, earning it the Hales Trophy (but not the Blue Riband, as many mistakenly believe, because the vessel didn’t set the record on a westbound crossing against the Gulf Stream).

Hoverspeed Great Britain held the record, and the owners held the trophy, until another Incat built ship, Catalonia, took the record in June 1998, then just a month later in July 1998 another ship built by Incat, CatLink V broke the record (which still stands).

The only problem is that all of the Incat vessels are transatlantic passenger ships in the same sense that a skateboard is a limousine.

United States still waits for a new life in Philadelphia.