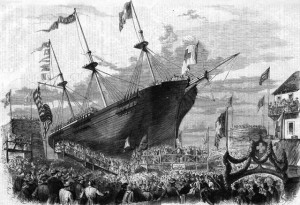 Norddeutscher Lloyd’s first Bremen (there have been six to date) was launched on 1 February 1858. The liner was not built in her namesake city but at Caird & Co. in Greenock, Scotland.

The 2,674 GRT Bremen was 333 feet long and 39 feet at beam. The vessel’s compound engines pounded out 1,310 horsepower to allow the ship to reach speeds of up to 11 knots. The single funnel liner also featured three masts with auxiliary sails. She could carry up to 550 passengers and a crew of 100.

On 19 June 1858, Bremen departed on her maiden voyage: Bremerhaven-New York. She arrived in New York harbor on 4 July (US Independence Day), 14 days and 13 hours after her departure.

Bremen was NDL’s first steam-powered liner. Just six months after entering service, in January 1859, she suffered a broken tailshaft and returned to Bremerhaven under sails.

In June 1874 Bremen was sold to E. Bates & Co. of Liverpool and converted into a full-rigged sailing ship. Bremen met her end on 16 October 1882. Sailing toward San Francisco harbor in heavy fog, carrying a load of whisky, a navigation error sent her onto the rocks surrounding the South Farralones Islands. All hands were saved. As for the cargo…

Does anyone remember the movie “Whisky Galore“?