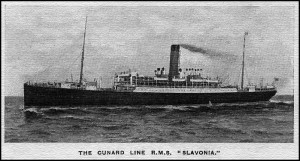 The SOS distress call was used for the first time on 10 June 1909 when the Cunard liner Slavonia transmitted the signal after fatally running aground off the Azores. The message was received by the nearby NDL liner Princess Irene, which joined the effort to save the stricken vessel’s passengers and crew. Nearby Cunard fleetmate, Batavia, spotting a visual distress signal from Slavonia, also raced to the scene.

Slavonia previously made history by transmitting, in 1904, the first personal telegraph message ever sent from a ship at sea to a land station. A birthday greeting to Emperor Franz Josef of Austria-Hungary was sent at the request of Hungarian members of the Hague Peace Commission. The message was transmitted by Medora Olive Newell, an experienced telegrapher who was a passenger on the liner. Newell may have been the first woman to operate a shipboard wireless station.