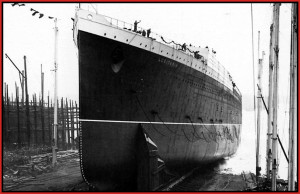 Created to counter growing German competition on the North Atlantic—led by liners such as Kaiser Wilhelm der Grosse and Deutschland—Cunard Line’s Lusitania (named after Roman Portugal) was the world’s largest ship at the time of her launch. Lusitania was, in fact, the largest moving anything on the face of the Earth (although she was soon eclipsed by her slightly larger sister ship, Mauretania).

Lusitania was originally designed with three funnels, but a decision to incorporate new Parsons turbines and associated equipment shortly before construction began necessitated the addition of a fourth funnel.