Cunard Line’s largest vessel to date, Aquitania, departed Liverpool on her maiden voyage to New York on 30 May 1914. It was a subdued departure in light of the previous day’s tragedy and the fact that Empress of Ireland’s destination was Liverpool. 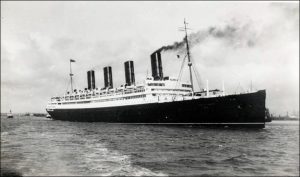 “The Ship Beautiful” had a sad beginning.

Soon, the liner would face an even larger tragedy. Aquitania made just two more voyages to New York before the outbreak of World War I and her requisition by the British government.

Aquitania made her first postwar voyage, from Liverpool to New York, on 17 July 1920. Soon, “The Ship Beautiful” became a favorite of celebrities, royalty, aristocracy and high-powered businessmen traveling between continents. She was, by any measure, the first Cunard “Queen” ship in everything but name and a floating embodiment of the Roaring Twenties.