According to the newsreel above, 10 percent of the John Brown & Co. workers assigned to the construction of Q4 (a.k.a. Hull 736, Queen Elizabeth 2) were under the age of 21.

In ordinary times, the fact that a major shipbuilder was preparing for the future by recruiting younger workers would have been good news. Yet the 1970s and 80s were hardly a good time for British shipbuilding, particularly in Clydebank. 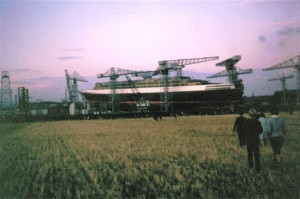 Youngsters behold a sight not likely to be seen again.

In 1967, this newsreel was no doubt seen by many viewers as evidence of a hopeful trend, an indication that British shipbuilding was back on track after years of losing work to foreign shipyards. Today, we watch the same newsreel with a sense of sadness and melancholy, and wonder whatever happened to those earnest young shipbuilders.

Today, Asian firms dominate global shipbuilding, with German, French and Italian shipyards remaining active, yet diminished, players. British shipbuilding is just a shadow of its former self, save for a few high-profile government projects.

According to the consulting firm IHS, 134 vessels—1.47m gross tonnes of shipping—were produced in the UK in 1976. Yet competition, primarily from Japan, South Korea and China has taken its toll, with the UK producing just four ships in 2011. Even Royal Navy tankers are now being built in the vast shipyards of South Korea.