It had all the potential to be history’s worst ocean liner-into-ocean liner collision.

On the afternoon of 16 May 1905, Caronia (1905), less than three months after her maiden voyage, departed New York bound for Liverpool. Slipping out of the harbor and nearing Sandy Hook, New Jersey, the Cunard liner encountered a dense fog bank. Minutes later, horrifyingly, the shape of massive four-funnel Norddeutscher Lloyd liner Kaiser Wilhelm II emerged from the mist. The German liner, just a little over two years old, had stopped abruptly—directly ahead—no doubt in response to the poor visibility. 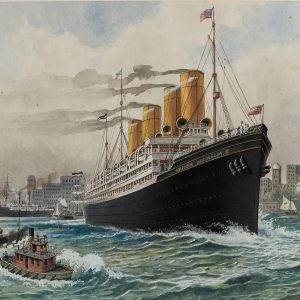 Immediate evasive action was required to avoid a disastrous collision between the liners. Caronia wasn’t able to steer around the idled Kaiser Wilhelm II, since the only in-channel opening was blocked by an approaching schooner. The final option remaining to the harbor pilot commanding Caronia was setting the Cunarder on a course that would intentionally run her aground. And that’s exactly what happened.

Caronia shook and shuddered as her bow plowed a wedge some 10 feet deep into a mudbank off of Flynn’s Knoll, New Jersey. Everyone on board the ship was safe, but the voyage to to Liverpool was now literally stuck in the mud.