While a handful of Atlantic ocean liners still exist, there is only one remaining classic Pacific ocean liner: NYK Line’s Hikawa Maru (1929).

On 13 May 1930, Hikawa Maru  departed on her maiden voyage. Hikawa Maru, along with two sister ships, provided service between Yokohama, Seattle, and Vancouver. Her passengers included such notables and movie legend Charlie Chaplin and baseball icon Babe Ruth. 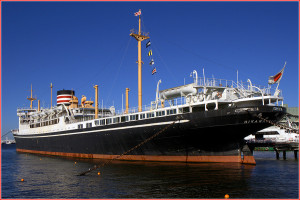 After years of steady transpacific service, Hikawa Maru was commandeered by the Imperial Japanese Navy after the attack on Pearl Harbor and converted into a hospital ship. In this role, Hikawa Maru was not a legitimate military target. Although she was damaged by a mine off Singapore on 14 February 1945, she managed to survive the war, the only major Japanese ocean liner to do so.

Postwar, Hikawa Maru repatriated large numbers of Japanese servicemen before returning to liner service. After bering withdrawn transpacific service, from 1961 to 1971, she served as a popular floating youth hostel. In 2003 Hikawa Maru was declared to a “cultural asset” of Yokohama. She’s now a museum ship in Yokohama, docked at Yamashita Park.