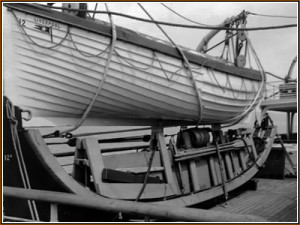 A collapsible lifeboat installed on Olympic.

Olympic missed her next westbound and eastbound crossings. The strike soon ended, however, when White Star conceded to most of the strikers rather modest demands. According to the Times, when Olympic’s full crew returned on 15 May, each man was told the number of the lifeboat he would have to stand by in case of emergency, while four men were engaged for the special purpose of looking after the lifeboats during the voyage. The mutiny (eh, strike) was over.

Still, on 4 May 1912, Portsmouth magistrates found the striking Olympic crewmembers guilty of mutiny, yet released them without punishment.